Last time I covered seven signs that you have become the focus rather than Christ.  In this post I want to share with you some attitudes we need to have for us to “decrease” or become “less and less.”  John the Baptist declared that “He (Christ) must become greater and greater and I must become less and less” (John 3:30 NLT).  That’s the goal for all of us. 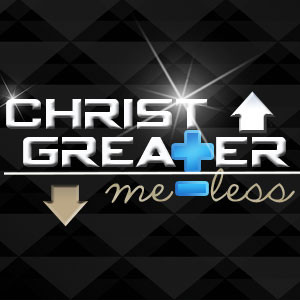 Like John the Baptist, the apostle Paul had a pretty good understanding of what it meant for Christ to increase and him to decrease.  When he addressed the Corinthian church he wanted them to understand that there wasn’t a competition between him and other apostles or teachers of the truth.  “When one of you says, “I am a follower of Paul,” and another says, “I follow Apollos,” aren’t you acting just like people of the world? After all, who is Apollos? Who is Paul? We are only God’s servants through whom you believed the Good News. Each of us did the work the Lord gave us. I planted the seed in your hearts, and Apollos watered it, but it was God who made it grow. It’s not important who does the planting, or who does the watering. What’s important is that God makes the seed grow. The one who plants and the one who waters work together with the same purpose. And both will be rewarded for their own hard work.” (1 Corinthians 3:4-8 NLT)

Seven Attitudes To Help You Become Less and Less:

• Recognize you are a servant (John 1:27; 1 Corinthians 3:5) I know Jesus told His disciples that He no longer called them servants but friends (John 15:15), but that has to do with the relationship that they and we have with Christ because He has revealed to us everything the Father has told Him. So in that sense we are His friends. But we are still to take on the attitude and servitude that Christ had (Philippians 2:5-11 esp. verse 7).
• Do the work God gave to you to do, not someone else’s work (John 1:23; 1 Corinthians 3:5). Quit trying to be someone else. Stop comparing yourself to other people and stop comparing other people to you and do what God has given you to do.
• Recognize it is God who brings success (John 3:21; 1 Corinthians 3:6). Any success you have isn’t because you are so great. It’s because God is so great! Without Him you can do nothing. (John 15:5)
• Your work is only important in light of what God does. (John 3:27; 1 Corinthians 3:7) Don’t think too “highly” of yourself (Romans 12:3). If God’s not in it, then it’s not worth doing. We become less and less when we depend on God more and more.  Paul recognized that the one who planted the seed and the one who watered the seed weren’t anything.  The only thing that mattered was that God made it grow.  What you do isn’t important.  All that matters is what God does.   (2 Corinthians 12:7-10 NLT – “…even though I have received such wonderful revelations from God. So to keep me from becoming proud, I was given a thorn in my flesh, a messenger from Satan to torment me and keep me from becoming proud. Three different times I begged the Lord to take it away. Each time he said, “My grace is all you need. My power works best in weakness.” So now I am glad to boast about my weaknesses, so that the power of Christ can work through me. That’s why I take pleasure in my weaknesses and in the insults, hardships, persecutions, and troubles that I suffer for Christ. For when I am weak, then I am strong.”
• Be willing to work with others for the same purpose (1 Corinthians 3:8). We become less and less when we submit to others. Not as “inferior” but as willing to “in humility consider others better than ourselves” for the purpose of working together (Philippians 2:1-4). Others aren’t more valuable than you. But your heart and attitude should be one of deference to others. When we do that, we can rejoice in the success of others.
• Rejoice in the success of others (John 3:29). We all belong to the same body. We should rejoice with each other (1 Corinthians 12:26).  It’s time we are happy for our brothers and sisters rather than be upset at their success.
• You become less and less when you find satisfaction in Christ alone. You don’t need anything or anyone else to validate you or to give your life meaning. Jesus has already done that. Remember, Jesus said of John: “I tell you the truth, of all who have ever lived, none is greater than John the Baptist. Yet even the least person in the Kingdom of Heaven is greater than he is!” (Matthew 11:11 – NLT) That is Jesus’ testimony about you and me. Believe it, receive it, and live it.

You can listen to the entire message below.

Subscribe to Christ Is All And In All by Email