Recently, I have become fascinated with the Bible…not just it’s spiritual benefits, as I’ve always loved that, but the book itself.  How did we come to have this book? What process was used? Why so many translations? Why does the church believe it is inspired? Can all the translations be trusted? It is these and other questions, I hope to address in a series of posts on “Our Bible’s History.”  Sit back and hang on to your seats as you will be challenged to look carefully at the book we have come to love and trust to show us the way to salvation. I believe if you stay with me through the entire series your faith will be “stronger” than ever! 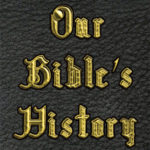 Let me begin by saying, I agree with Paul: “All scripture is given by inspiration of God, and is profitable for doctrine, for reproof, for correction, for instruction in righteousness.” (2 Timothy 3:16). I other words, when God moved upon and inspired the authors of the 66 books of the Bible to record what “He” said or what the “Holy Spirit” moved upon them to say or write, it was “perfect.” All of the “original autographs” (the original manuscripts that were written by the authors themselves) were inspired and without error in everything that it addresses. Unfortunately, all of these “original autographs” have been lost.  We no longer have them.  All we have are “imperfect” copies which are not without error (I’ll explain more about this later). For many that will come as a surprise or shock. Do not let this shake your faith. There are not any mistakes of a “critical” nature nor that would in any way compromise the overall tenor and text of the Bible and its message.

We have none of the “original documents.” What we have are copies of the originals that were initially  hand copied by scribes, then mechanically copied after the invention of the printing press, and now digitally or electronically copied and passed down through the centuries. All this copying doesn’t mean that God hasn’t preserved His Word through the millennia for us to be able to rely upon, trust, and place our faith in. We can be assured that through the influence of the Holy Spirit, God’s Word was, is, and continues to be inspired and kept true.

As I began to research the Bible, I approached it with an open mind and a prayerful spirit. I don’t claim to be an expert and I am not so proud to say that what I have to present is the only lens that you can look through to find the truth. I do however approach this topic with great humility and reliance upon those who have spent their entire lives examining the documents that we have and that we rely upon for our Bible and the basis of our faith. We may disagree on some aspects of what I have to say, but that doesn’t mean I’m right and you’re wrong or vice versa. But if we desire to know the truth we should treat each other with grace, respect, and kindness.

To fully understand all we need to know about the Bible, I believe it is important to know and understand how the Bible differs from other spiritual books especially the Qur’an. Author Kenneth Cragg  “Contemporary Trends in Islam” in Muslims and Christians on the Emmaus Road, ed. J. Dudley Woodberry (Monrovia, CA: MARC, 1989) states:

“Islam is fundamentalist in a way that Christian biblical faith could never properly be. For the Quran is understood as the ipsissima verba (Latin phrase for “the very words”) of God himself, given in Tanzil (the sending down) to Muhammad in Arabic, as a transcribing of the Divine Book in heaven.”

So what Muslim’s believe when it comes to the Qur’an, is that what is in the book is the actual spoken verbal word of God and that God spoke Arabic. Further they believe that the Qur’an can’t be translated into any other language. If it is, then it is considered an “interpretation” and not a true inspired translation, it has to be Arabic for it to be considered sacred and inspired. Christians don’t believe that God spoke Hebrew or Aramaic. We just don’t look at God’s Word in that sense. We accept that the Bible can be translated into many languages as it has been over the centuries.

In an article titled “Translating the Untranslatable: A Survey of English Translations of the Qur’an” by A.R. Kidwai, Kidwai states:

“The Muslim Scripture is yet to find a dignified and faithful expression in the English language that matches the majesty and grandeur of the original… Ultimately, of course, the Muslim should try to discover the original and not allow himself to be lost in a maze of translations and interpretations.”[^1]

This idea differs drastically from the Christian’s perspective of the Bible. We believe the Bible can be translated into any language and still be the inspired Word of God that leads humanity to God’s eternal purpose. We don’t have to read it in the original Greek or Hebrew.

Stephen Walls in his book “The Cross-Cultural Process In Christian History” states:

“Christian faith must go on being translated, must continuously enter into vernacular culture and interact with it, or it withers and fades.

Islamic absolutes are fixed in a particular language, and in the conditions of a particular period of human history. The divine Word is the Qur’an, fixed in heaven forever in Arabic, the language of original revelation.

For Christians, however, the divine Word is translatable, infinitely translatable. The very words of Christ himself were transmitted in translated form in the earliest documents we have, a fact surely inseparable from the conviction that in Christ, God’s own self was translated into human form.

Much misunderstanding between Christians and Muslims has arisen from the assumption that the Qur’an is for Muslims what the Bible is for Christians.

It would be truer to say that the Qur’an is for Muslims what Christ is for Christians.”

In the next post I will cover why all Bibles, including the Authorized King James Version, are not “word for word” translations and cover some statistics on the current work of Bible translations.